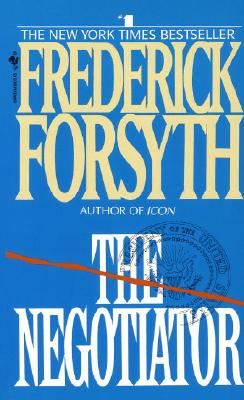 Frederick Forsyth, master of the international thriller, retums with an electrifying story of a man of immense power and a conspiracy to crush the President of the United States. Only one man--Forsyth's most unforgettable hero yet--can prevent the plan from succeeding.

His name is Quinn. He is the Negotiator. President Cormack is bent on a signing a sweeping U.S.-Soviet disarmament treaty, and the master conspirator is determined to stop him. The kidnapping of a young man on a country road in Oxfordshire is but the first brutal step in the explosive plot engineer the president's destruction. Enter Quinn. Quinn plays the kidnappers like a master musician. . . until, in a shocking tumabout, he discovers that ransom was not their objection after all--and that he has been lured into a cunningly woven web. Now he must draw upon his deepest strengths--to save not only the victim but the entire free world.