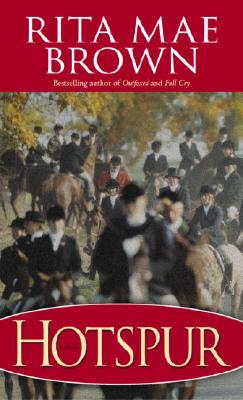 In her well-received novel Outfoxed, Rita Mae Brown vividly and deftly brought to life the genteel world of foxhunting, where hunters, horses, hounds, and foxes form a tightly knit community amidst old money and simmering conflicts. With Hotspur, we return to the Southern chase-and to a hunt on the trail of a murderer.

Jane "Sister" Arnold may be in her seventies, but she shows no signs of losing her love for the Hunt. As Master of the prestigious Jefferson Hunt Club in a well-heeled Virginia Blue Ridge Mountain town, she is the most powerful and revered woman in the county. She can assess the true merits of a man or a horse with uncanny skill. In short, Sister Jane is not easily duped.

When the skeleton of Nola Bancroft, still wearing an exquisite sapphire ring on her finger, is unearthed, it brings back a twenty-one year old mystery. Beautiful Nola was a girl who had more male admirers than her family had money, which was certainly quite a feat. In a world where a woman's ability to ride was considered one of her most important social graces, Nola was queen of the stable. She had a weakness for men, and her tastes often ventured towards the inappropriate, like the sheriff's striking son, Guy Ramy. But even Guy couldn't keep her eyes from wandering. When Nola and Guy disappeared on the Hunt's ceremonial first day of cubbing more than two decades ago, everyone assumed one of two things: Guy and Nola eloped to escape her family's disapproval; or Guy killed Nola in a jealous rage and vanished. But Sister Jane had never bought either of those theories.
Sister knows that all the players are probably still in place, the old feuds haven't died, and the sparks that led to a long-ago murder could flare up at any time. Hotspur brings all of Rita Mae Brown's storytelling gifts to the fore. It's a tale of Southern small-town manners and rituals, a compelling and intricate murder mystery, and a look at the human/animal relationship in all its complexity and charm. From the Hardcover edition.