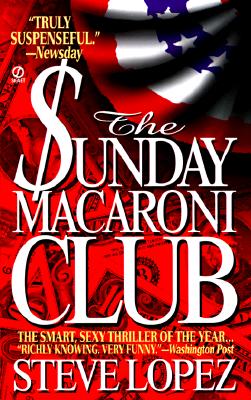 Assistant District Attorney Lisa Savitch has a problem. She's been assigned to nail the Sunday Macaroni Club - four remnants of the old political machine led by Augie Sangiamino, former U.S. Senator, convicted felon, and now a political consultant. These guys aren't even worth a staple, much less a nail. As for Augie, it's like he says at grace on Sunday: We thank you, Lord, for this wonderful macaroni dinner. But we could use a little help, to tell you the truth, in this campaign. His two candidates are way behind in the polls, and without a miracle, divine or otherwise, there doesn't seem to be any way to reverse the trend. Miracles, of course, cost money. Whitney Pritchard III also has a problem - his oil company is belching clouds of yellow smoke, and paying all those fines hasn't done him much good. What he needs are some friends in high, or even not so high, places. Then there's Mike Muldoon, the ex-FBI agent who nailed Augie once and would be happy to do it again. He doesn't really have a problem - unless you count the fact that he can't stop thinking about Lisa Savitch. It's a city where macaroni isn't necessarily macaroni, bottom-feeders can rise to the top, and has-beens don't always know they've been had - Philadelphia's own glorious carnival of greed, ambition, and self-preservation.