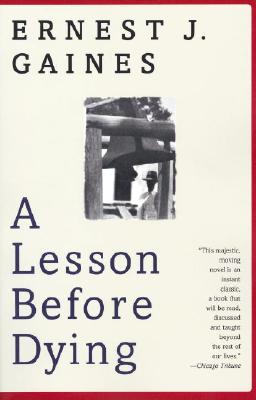 A Lesson Before Dying

"A Lesson Before Dying," is set in a small Cajun community in the late 1940s. Jefferson, a young black man, is an unwitting party to a liquor store shoot out in which three men are killed; the only survivor, he is convicted of murder and sentenced to death. Grant Wiggins, who left his hometown for the university, has returned to the plantation school to teach. As he struggles with his decision whether to stay or escape to another state, his aunt and Jefferson's godmother persuade him to visit Jefferson in his cell and impart his learning and his pride to Jefferson before his death. In the end, the two men forge a bond as they both come to understand the simple heroism of resisting--and defying--the expected.
Ernest J. Gaines brings to this novel the same rich sense of place, the same deep understanding of the human psyche, and the same compassion for a people and their struggle that have unformed his previous, highly praised works of fiction.

Title: A Lesson Before Dying

A Lesson Before Dying