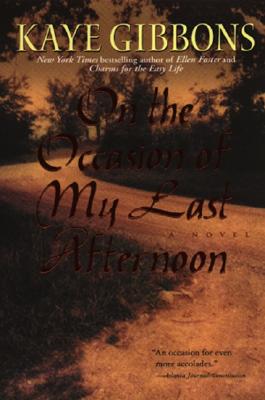 On the occasion of my last afternoon

Sprawling in its scope but heartbreakingly exact in its depiction of a family torn apart," On the Occasion of My Last Afternoon" is a magnificent novel in the great Southern tradition. In the year 1900--on the afternoon she suspects might be the last of her long, eventful life--Emma Garnet Tate Lowell sets down on paper what came before, determined to make an honest account of it. Born to privilege on a James River plantation, she grew up determined to escape the domination of her bullying, self-made father, Samuel P. Tate, and ultimately seceded from his control to marry Quincy Lowell, a surgeon and member of the distinguished Boston family. But then came the Civil War. Working alongside Quincy, assisting him in the treatment of wounded soldiers, she witnessed scenes that would be engraved forever in her memory. And, before beginning the long journey of her own reconstruction, she must face the shame of her relationship to her "servants" and learn the terrible secret that shaped her father's life.

Title: On the occasion of my last afternoon

On the occasion of my last afternoon