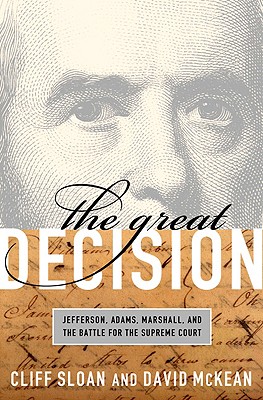 In 1800, the United States teetered on the brink of a second revolution. The presidential election between Adams and Jefferson was a bitterly contested tie, and the government neared collapse. The Supreme Court had no clear purpose or power--no one had even thought to build it a courtroom in the new capital city. When Adams sought to prolong his policies in defiance of the electorate by packing the courts, the fine words of the new Constitution could do nothing to stop him. It would take a man to make those words good, and America found him in John Marshall.

The Great Decision tells the riveting story of Marshall and of the landmark court case, Marbury v. Madison, through which he empowered the Supreme Court and transformed the idea of the separation of powers into a working blueprint for our modern state. Rich in atmospheric detail, political intrigue, and fascinating characters, The Great Decision is an illuminating tale of America's formative years and of the evolution of our democracy.