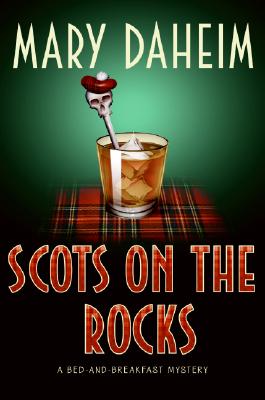 Scots on the Rocks: A Bed-and-Breakfast Mystery

When Judith and her cousin Renie go on vacation in a remote and possibly haunted Scottish castle owned by a rich whiskey distillery baron strange things start occurring. They meet Harry Gibbs, a dissolute young man who is estranged from his wife and is found smothered to death shortly after Judith and Renie arrive. His widow, Moira, is suspect No. 1, of course, but there are plenty to go around since Harry was a real jerk and wanted to run the petrol company Moira inherited from dear old dad. Suspects include Moira's bastard half-brother, Blackwell Petroleum's sleazy CEO, the wily comptroller, an even wilier corporate attorney, the whisky baron, Moira's former mother-in-law who mixes delicious jams along with her not-so-delicious poisons, Moira's apparent lover, and, last but not least, Chuckie, the dwarfish epileptic who runs around castle. There's a ghost, some goofy villagers, and enough suspects to overwhelm any police force, but no challenge is too daunting for the cousins.

Title: Scots on the Rocks: A Bed-and-Breakfast Mystery

Scots on the Rocks: A Bed-and-Breakfast Mystery