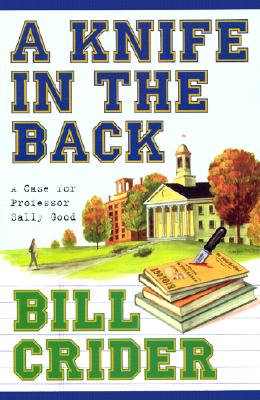 A knife in the back

Dr. Sally Good, chair of the Department of English at Hughes Community College has learned how to cope with the many minor disasters and a couple of major ones, including a murder, that have cropped up since her tenure. Right now, however, her only worry is about her own behavior. She's just violated one of the major rules for department chairs - never date the staff. She hadn't actually dated Jack Neville, but she had said yes when he asked her to go out with him.
It's beginning to look as though Sally may not have to worry about that. Her intended escort has come under suspicion of murdering one of the college trustees, and could be arrested any time now. The good news is that the evidence is shaky and Neville is far from the only person around who wouldn't mind seeing Bostic's obit in the county paper. The man is a used-car salesman of questionable morals and an antediluvian who is against educating or even feeding the men in the local prison, where the college conducts classes. The sheriff is the bad news. Sally and Jack have tangled with in "Murder Is an Art," and he can be depended upon to go for the obvious, though questionable, solution, based on the discovery of Jack's handmade knife at the scene. Sally feels the responsibility: it is up to her to plunge once more into investigation.
The search becomes a true comedy of errors, some furnished by Neville himself, who is thoroughly nice but somewhat of an airhead (the modern phrase for "absent-minded professor"). The really bright ideas and solid detection is furnished by the charming Sally, and author Crider happily provides the dry humor that so charms his readers both in his accounts of Dr. Good's adventures and those of his Sheriff Dan Rhodes.

Title: A knife in the back

A knife in the back