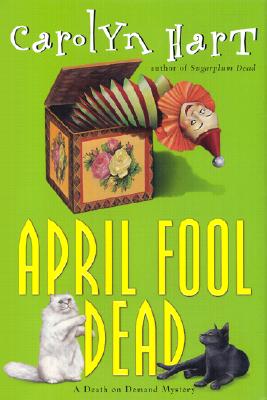 Death is no joke on Broward's Rock, though reading about deadly doings remains as popular a pastime as ever for citizens of the stormy South Carolina sea island. Now, with spring newly sprung, Annie Darling has conceived of an ingenious promotional scheme to draw customers into her Death on Demand bookshop for the upcoming in-store appearance by world-class mystery author Emma Clyde. Offering a free book to anyone who can solve a series of clues about popular whodunits, Annie and hubby Max pass out their flyers all over town. But an April Fool prankster is distributing a counterfeit flyer, supposedly devised by the Darlings, offering clues to several lethal local "accidents" that have occurred lately -- including the drowning of Ms. Clyde's own husband -- complete with not-so-vague accusations of murder.

Suddenly the Darling name is mud, thanks to the vicious slanders of an unknown counterfeiter. And Annie knows that she herself is going to have to do the bulk of the sleuthing -- with the only intermittently effective aid of Max--if she doesn't want this particular April Fool's to last well past Memorial Day.

Then, just as things couldn't seem to get any worse, they do. In the wink of a bloodshot eye, Annie's hunt for a malicious trickster has become a desperate search for a killer. Because now more than her reputation is at stake. If she can't rid her idyllic isle of a secret slayer, the malefactor's next murderous "joke" may be on her

Brimming with stunning surprises, rapier wit, and wonderful suspense -- boasting the author's trademark cast of uniquely unforgettable eccentrics -- Carolyn Hart's lucky thirteenth Death on Demand novel is an unmitigated delight, ranking with the very best of this, or any, contemporary cozy mystery series. No foolin'