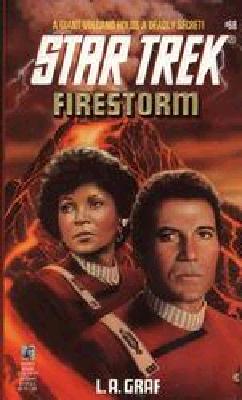 When a convert Elasian mining operation interferes with a Federation geological expedition, Captain James T. Kirk and the crew of the" Starship Enterprise(TM) " are dispatched to the planet Rakatan to mediate between the rival parties. The Elasian Dohman claims that the planet and its dilithium deposits are hers. But the geologists warn that if Rakatan Mons -- the galaxy's largest stratovolcano -- should erupt while the Elasians are mining its flanks, no amount of dilithium will save them.

While Lt. Commander Uhura and a landing party struggle to determine if the Dohlman's claim is true, Captain Kirk puts his ship on the line to keep the two ships from each other's throats. Soon, however, concerns over the planet's ownership are overshadowed by the arrival of a hostile Elasian armada and a cataclysmic volcanic explosion on the surface that threatens all parties with a deadly shower of destruction...