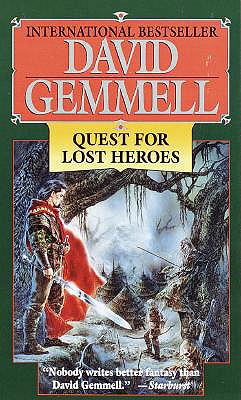 The Drenai stronghold had fallen. Now blood-hungry Nadir hordes spread desolation and despair across all the lands...
...even tiny Gothir, where slavers seized a young girl while the villagers looked the other way--all but the peasant boy Kiall. His unlikely rescue attempt would lead across the savage steppes and on through the Halls of Hell. The youth would face ferocious beasts, deadly warriors, and demons of the dark; he would emerge a man--or not emerge at all.
But Kiall would not face these dangers alone. Heroes out of legend joined his quest: Chareos the Blademaster, Beltzer the Axeman, and the bowmen Finn and Maggrig. And one among their company hid a secret that could free the world of Nadir domination. That one was the Nadir Bane, the hope of the Drenai. That one was the Earl of Bronze.
Thus did a search for a stolen slave girl become a quest that would shake the very world.