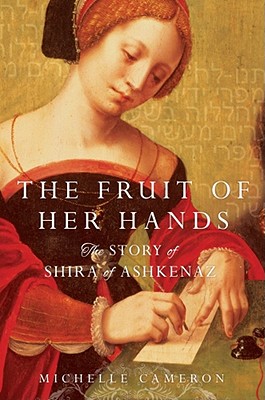 The Fruit of Her Hands

Based on the life of the author's thirteenth-century ancestor, Meir ben Baruch of Rothenberg, a renowed Jewish scholar of medieval Europe, this is the richly dramatic fictional story of Rabbi Meir's wife, Shira, a devout but rebellious woman who preserves her religious traditions as she and her family witness the rise of anti-Semitism in Europe.

Raised by her widowed rabbi father and a Christian nursemaid in Normandy, Shira is a free-spirited, inquisitive girl whose love of learning shocks the community. When Shira's father is arrested by the local baron intent on enforcing the Catholic Church's strictures against heresy, Shira fights for his release and encounters two men who will influence her life profoundly--an inspiring Catholic priest and Meir ben Baruch, a brilliant scholar. In Meir, Shira finds her soulmate.

Married to Meir in Paris, Shira blossoms as a wife and mother, savoring the intellectual and social challenges that come with being the wife of a prominent scholar. After witnessing the burning of every copy of the Talmud in Paris, Shira and her family seek refuge in Germany. Yet even there they experience bloody pogroms and intensifying anti-Semitism. With no safe place for Jews in Europe, they set out for Israel only to see Meir captured and imprisoned by Rudolph I of Hapsburg. As Shira weathers heartbreak and works to find a middle ground between two warring religions, she shows her children and grandchildren how to embrace the joys of life, both secular and religious.

Vividly bringing to life a period rarely covered in historical fiction, this multi-generational novel will appeal to readers who enjoy Maggie Anton's "Rashi's Daughters," Brenda Rickman Vantrease's "The Illuminator," and Geraldine Brooks's "People of the Book."

Title: The Fruit of Her Hands

The Fruit of Her Hands