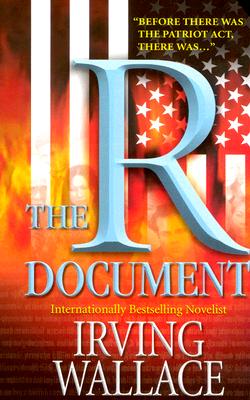 Before the Patriot Act, there was . . . The R Document
As crime and violence threaten to engulf America, the President proposes a daring new amendment to the Constitution, allowing the Bill of Rights to be suspended during times of national emergency.
To its supporters the 35th Amendment is the only way to keep America from sliding into chaos. Its opponents see the Amendment as an outright attack on freedom.
Christopher Collins, the newly-appointed Attorney General, has reservations about the Amendment, but feels confident that it would not be abused in the way its more hysterical opponents fear. Then a deathbed confession from his predecessor warns him to beware of something called "The R Document."
What is The R Document, and what does it have to do with the proposed 35th Amendment? As state after state ratifies the Amendment, pushing it ever closer to becoming the law of the land, Collins must get to the bottom of an unimaginable conspiracy--before time runs out for the fundamental liberties of all Americans.
First published in 1976, Irving Wallace's bestselling thriller is more timely than ever before.