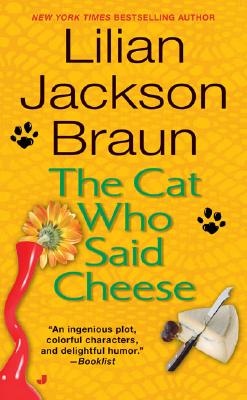 The cat who said cheese

In this mystery in the bestselling Cat Who series, a murder sends Jim Qwilleran and his cats, Koko and Yum Yum, on a trail that will demand all their feline intuition and mustachioed insight...

With the Great Food Explo approaching, there's a lot of scrumptious activity in Moose County. Residents can't wait for the restaurant openings, the cheese-tasting, and the bake-off, among other festivities. But there's nothing as tasty as a morsel of gossip, so when a mysterious woman moves into the New Pickax Hotel, the locals--including Qwill--indulge in lots of speculation. But then a bomb explodes in her room, killing the hotel housekeeper--and now Qwill and his kitty sidekicks, Koko and Yum Yum, must put aside the fun and figure out who cooked up this murderous recipe...

Title: The cat who said cheese

The cat who said cheese