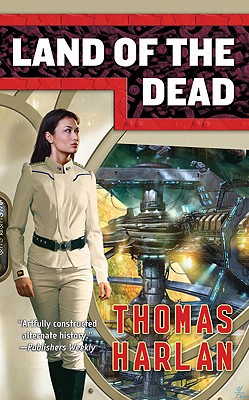 Land of the Dead

It's a small change in our history: imagine that the Japanese made contact with the Aztec Empire. Instead of small-pox and Christianity, they brought an Imperial alliance, samurai ethics, and technology. By the time of these books, the Emperor in Mexico City rules not just the entire planet Earth, but a growing interplanetary Empire. But the Galaxy is not a hospitable place, and there are other powers, both new and very very old, who would stop the spread of the power in Anuhuac. A weapon of the Old Ones, from the time of the First Sun, has been found in a region of space. It must be investigated, then tamed or destroyed to keep it from the hands of opposing powers. Gretchen Anderssen, freelance archeologist and specialist in First Sun artifacts, has been hired by her old mentor Green Hummingbird, agent of the Mirror Service, to join him in the study. They will be joined by old friends, and some old enemies as well.

Title: Land of the Dead

Land of the Dead