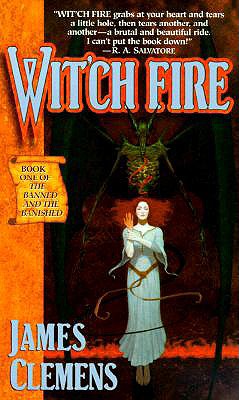 "I loved every page of this book. Clemens has constructed a world of magic that's never been seen before, with a cast of beings who are so engaging and entrancing that you never want the story to end."--John Saul

On a fateful night five centuries ago, three mages made a desperate last stand, sacrificing everything to preserve the only hope of goodness in the beautiful, doomed land of Alasea. Now, on the anniversary of that ominous night, a girl-child ripens into the heritage of lost power. But before she can even comprehend her terrible new gift, the Dark Lord dispatches his winged monsters to capture her and bring him the embryonic magic she embodies. Fleeing the minions of darkness, Elena is swept toward certain doom--and into the company of unexpected allies. There she forms a band of the hunted and the cursed, the outcasts and the outlaws, to battle the unstoppable forces of evil and rescue a once-glorious empire . . .

Praise for Wit'ch Fire "Wit'ch Fire grabs at your heart and tears a little hole, then tears another, and another--a brutal and beautiful ride. I can't put the book down "--R. A. Salvatore "Full of violence, magical pyrotechnics, and black-heared villains."--Publishers Weekly