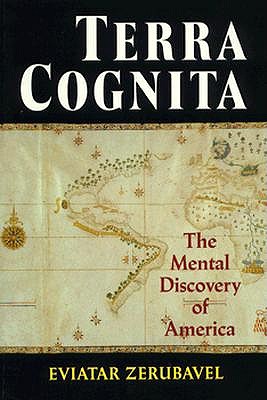 What do we mean when we say an explorer discovered a particular piece of land? Do we mean he saw it first? Or he was the first to set foot on it? Or he was the first to recognize the importance of his discovery? It is the third possibility that fascinates Eviatar Zerubavel, the only author to look at the mental discovery of America.
When Columbus landed on an island in the Antilles in 1492, he thought he had discovered a few islands off the coast of Asia. He did not realize he had found a previously unknown continent. In our action-oriented civilization, we value the 'actual' physical discovery of land more than the 'merely' intellectual activity of recognizing the true geographical nature of discovery. It is one thing to discover a coast; it is another and more significant thing to realize that that coast constitutes the outline of an entirely "new world."
Our image what we now call North and South America emerged slowly, over two and a half centuries. Europeans had to place the information brought back by explorers about hundreds of often disjointed pieces into a jigsaw puzzle to complete their picture of America. They had to figure out that all the lands, including British Columbia and Patagonia, were part of a single geographic entity, a full-fledged continent that is cut off by water from Asia. They also had to realize that the various lands discovered only appeared to be separate, independent discoveries but were actually part of the same landmass. Using fascinating old maps to prove his point, Zerubavel explains that as late as 1546, many Europeans failed to recognize that North and South America were connected by land, or that America was detached from Asia. Vespucci, Balboa, and Magellan were more instrumental than Columbus in recognizing these facts, especially for South America. But there remained confusion for another eighty years over whether North America could be a part of Asia. Not until 1778, when Cook sailed along America's entire northwest shore, could Europeans be abolutely certain that Asia and America were not connected in the far north.
Zerubavel discusses the process of the mental discovery, in terms of new explorations. More importantly, he discusses the psychology of discovery. Columbus was reluctant to give up on his idea that he had found Asia, no matter how many facts he learned that called his sense of geography into question. Other explorers, and a number of creative mapmakers were more open to new ideas. We actually celebrate the discovery of an explorer who was a cognitive coward, unusually resistant to change. Zerubavel thus gives us a new way to think about discovery. It requires an open mind as well as physical bravery.