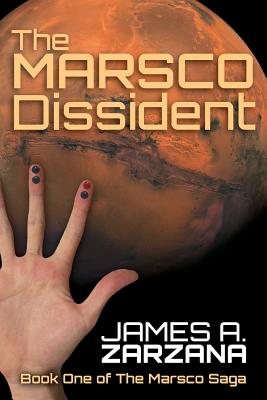 By: Zarzana, James A.

The Marsco Dissident is the first of four speculative science fiction novels in The Marsco Saga.

It is set in a world ruled by a single megacorporation that emerged from the ashes of plagues and wars, when cyber-warfare rendered computer systems nearly inoperable. Now, Marsco commands Earth and its colonies throughout the solar system. Marsco owns all the cybernetics and keeps tight control over who operates computers, using microchips embedded in authorized fingertips.

The Marsco Dissident opens in 2092 with Marsco associates holding all power, with subsidiaries having some access, but with the vast majority of Earth's population poor and uneducated, condemned to virtual slavery. This dystopian world is unveiled through main characters Walter Miller, a disenchanted astroengineer for Marsco; his daughter Tessa, who unlike her father remains loyal to Marsco; and Anthony "Zot" Grizotti, whose relationship with Tessa is destroyed as he, too, begins questioning Marsco.

With elements of cyberpunk and military sci-fi woven into a richly complex worldview, The Marsco Dissident carries a sense of vivid inevitability that derives from current events.