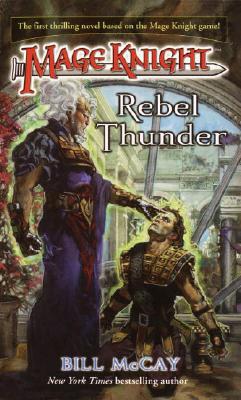 "Inspired by the award-winning game, here is a spellbinding tale of intrigue, mystery, and betrayal among warlords, mages, and revolutionaries that sweeps from battlefield to throne room. . . .
"MAGE KNIGHT: REBEL THUNDER
Atlantis--a floating city five hundred feet in the air--is suspended by the force of the magical Magestone. But its power comes at a price. The precious gems must be strip-mined from the earth by human and Dwarven slaves under the ruthless command of Atlantean overseers.
Sarah Ythlim, head of the Black Powder Rebels, is a woman with only one thing on her mind: the destruction of the Atlantean Empire. In secret, she plots with her cohorts to introduce a new weapon to the fight: gunpowder. Blaize is an elite Guardsman who lives to serve the Atlantean government. When his superiors discover that a rebel group plans to attack the empire, Blaize is ordered to act as a spy. But during his covert assignment, Blaize discovers that the lines between good and evil are often blurred. Now he must decide where his allegiances lie. . . .
WIZKIDS LOGO
WWW.MAGEKNIGHT.COM
Includes an exciting new Mage Knight game scenario