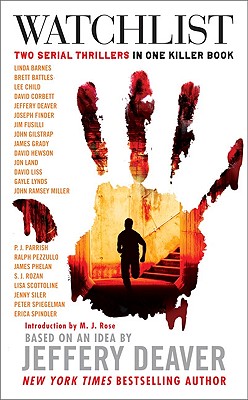 From International Thriller Writers comes "Watchlist: " two powerful novellas featuring the same thrill cast of characters in one major suspenseful package. "The Chopin Manuscript" and then "The Copper Bracelet" were a collaboration by some of the world's greatest thriller writers, including Lee Child, Joseph Finder, Lisa Scottoline, and Jeffery Deaver, who conceived the characters and set the plot in motion. The other authors each wrote a chapter and Deaver then completed what he started, bringing both novellas to their startling conclusions.

In the first novella, " The Chopin Manuscript, " former war crimes investigator Harold Middleton possesses a previously unknown score by Frederic Chopin. But he is unaware that, locked within its handwritten notes, lies a secret that now threatens the lives of thousands of Americans. As he races from Poland to America to uncover the mystery of the manuscript, Middleton will be accused of murder, pursued by federal agents, and targeted by assassins. But the greatest threat will come from a shadowy figure from his past: the man known only as Faust.
Harold Middleton returns in "The Copper Bracelet"-the explosive sequel to "The Chopin Manuscript"-as he's drawn into an international terror plot that threatens to send India and Pakistan into full-scale nuclear war. Careening from Nice to London and Moscow to Kashmir to prevent nuclear disaster, Middleton is unaware that his prey has changed and the act of terror is far more diabolical than he knows. Will he discover the identity of the Scorpion in time to halt an event that will pit the United States, China, and Russia against each other at the brink of World War III?