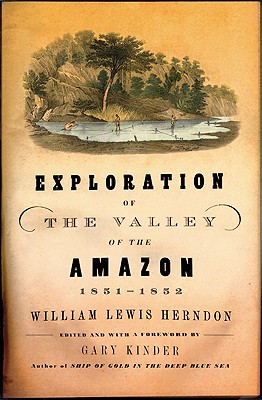 In 1857, Captain William Lewis Herndon sacrificed his life trying to save 600 passengers and crew when his ship foundered in a hurricane off the Carolina coast. Memorialized in Gary Kinder's best-selling book Ship of Gold in the Deep Blue Sea, Herndon, with this final courageous act, epitomized a lifetime of heroism. Seven years earlier, the secretary of the Navy had appointed Herndon to lead the first American expedition into the Amazon Valley.

Herndon departed Lima, Peru, on May 20, 1851, and arrived at Para, Brazil, nearly a year later, traveling 4,000 miles by foot, mule, canoe, and small boat. He cataloged the scientific and commercial observations requested by Congress, but he filed his report as a narrative, creating an intimate portrait of an exotic land before the outside world rushed in.

Herndon's report so far surpassed his superiors' expectations that instead of printing the obligatory few hundred copies for Congress, the secretary of the Navy ordered 10,000 copies in the first print run; three months later, he ordered 20,000 more. Herndon described his adventures with such insight, such compassion and wit, and such literary grace that he came to symbolize the new spirit of exploration and discovery sweeping mid-nineteenth century America.

For the next hundred years, Herndon's report languished out of print before being revived briefly in 1951. Now, for the first time in nearly fifty years, Gary Kinder and Grove Press bring to readers one of the greatest chronicles of travel and exploration ever written.