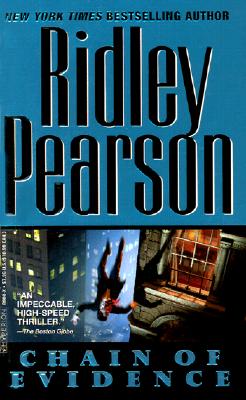 Can Detective Joe "Dart" Dartelli uncover the truth? Or, more importantly, does he dare? Detective Joe "Dart" Dartelli made one critical mistake in his police career: He chose to ignore a piece of evidence in a case labeled a suicide that might have been a murder. The dead man was himself a vicious woman-killer who more than deserved his fate, but that ignored evidence pointed to Dart's former mentor, the brilliant forensic specialist Walter Zeller. Now another suicide victim turns up--the body of a wife-beater--and the evidence clearly shows that the death was self-inflicted . . . or does it? Zeller was the best at reading and understanding the forensics of a crime scene--could he have manipulated it? Worse, why has Zeller disappeared? It terrifies Dart to suspect that Zeller is in fact on some twisted vigilante crusade, but Dart also knows that if he's right, only he can stop it. Chain of Evidence is the intense, heart-pounding story of student versus mentor in the playing field of forensic investigation. Ridley Pearson links computer technology, psychological intensity, and complex questions of police and human ethics to create this breathlessly paced, unputdownable thriller.