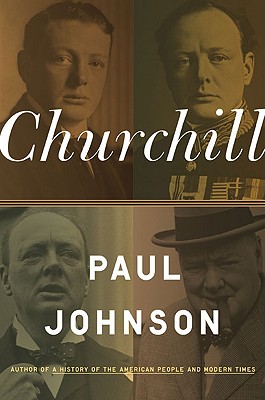 An acclaimed historian presents a revelatory look at the greatest statesman of the twentieth century
For eminent historian Paul Johnson, Winston Churchill remains an enigma in need of unraveling. Soldier, parliamentarian, Prime Minister, orator, painter, writer, husband, and leader all of these facets combine to make Churchill one of the most complex and fascinating personalities in history.
In Churchill, Johnson applies a wide lens and an unconventional approach to illuminate the various phases of Churchill s career. From his adventures as a young cavalry officer in the service of the Empire to his role as an elder statesman prophesying the advent of the Cold War, Johnson shows how Churchill s immense adaptability combined with his natural pugnacity to make him a formidable leader for the better part of a century. Johnson s narration of Churchill s many triumphs and setbacks, rich with anecdote and quotation, illustrates the man s humor, resilience, courage, and eccentricity as no other biography before.
Winston Churchill s hold on contemporary readers has never slackened, and Paul Johnson s lively, concise biography will appeal to historians and general nonfiction readers alike."