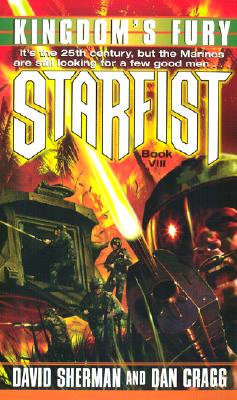 A few good Marines beat the fierce, fanatical aliens once before. But that was a skirmish-not a full-scale invasion.

The truth is out. No longer are the Skinks just a horrible secret haunting the Marines of Company L. Now the aliens are all-too-real invaders whose savage attacks have devastated planet Kingdom, a world of squabbling religions where the men of the 34th FIST confront a desperate situation. Cities that haven't already been reduced to rubble are under siege, while starving refugees roam the land. And still the Skinks come, rising from stinking primordial swamps to slake their thirst for slaughter, armed with an uncanny ability to locate the enemy and with weapons so deadly that a single blast can drop a warplane or a decimate a squad.

It's painfully evident that 34th FIST is no match for these near-invincible killers, which is why third platoon's been ordered to whip the citizens of Kingdom into fighting shape. With their backs to the wall and time running out, there's only one way the Marines can turn these timid, quarrelsome men into warriors: Take the battle to the enemy. It's a brilliant strategy, sure to succeed-if it doesn't get them killed first. . . .