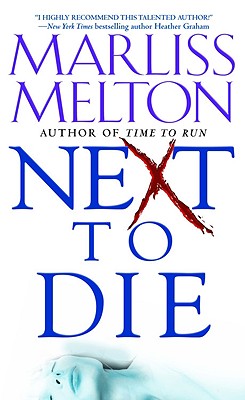 Penny Price dreads the sound of her ringing phone. She's convinced that the person barraging her with threatening calls is a man who got away with murder--her father's. Armed with evidence but branded a target, Penny's only salvation is the playboy nextdoor--Navy SEAL Lieutenant Commander Joe Montgomery. The sole survivor of the worst disaster in Special Forces history, Joe has been drowning his guilt in a potent mix of alcohol and isolation. Penny refuses to indulge his behavior and a tentative friendship begins, charged with desire. But as her father's killer sets his sights on Penny, all bets are off. The killer will do anything to protect his identity and Joe fears Penny is...NEXT TO DIE.

Title: Next to die