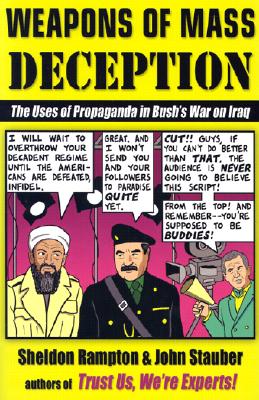 How the Iraq war was sold to the American public through professional P.R. strategies.

"The First Casualty": Lies that were told related to the Iraq war.

Euphemisms and jargon related to the Iraq war, e.g. "shock and awe," "Operation Iraqi Freedom," "axis of evil," "coalition of the willing," etc.

"War as Opportunity": How the war on terrorism and the war on Iraq have been used as marketing hooks to sell products and policies that have nothing to do with fighting terrorism.

The book includes a glossary -- "Propaganda: A User's Guide" -- and resources to help Americans sort through the deceptions to see the strings behind Washington's campaign to sell the Iraq war to the public.