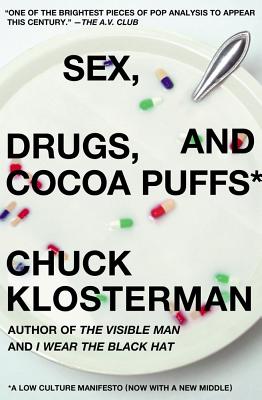 Countless writers and artists have spoken for a generation, but no one has done it quite like Chuck Klosterman. With an exhaustive knowledge of popular culture and an almost effortless ability to spin brilliant prose out of unlikely subject matter, Klosterman attacks the entire spectrum of postmodern America: reality TV, Internet porn, Pamela Anderson, literary Jesus freaks, and the real difference between apples and oranges (of which there is none). And don't even get him started on his love life and the whole Harry-Met-Sally situation.
Whether deconstructing "Saved by the Bell" episodes or the artistic legacy of Billy Joel, the symbolic importance of "The Empire Strikes Back" or the Celtics/Lakers rivalry, Chuck will make you think, he'll make you laugh, and he'll drive you insane -- usually all at once. "Sex, Drugs, and Cocoa Puffs" is ostensibly about art, entertainment, infotainment, sports, politics, and kittens, but -- really -- it's about us. All of us. As Klosterman realizes late at night, in the moment before he falls asleep, "In and of itself, nothing really matters. What matters is that nothing is ever 'in and of itself.'" Read to believe.