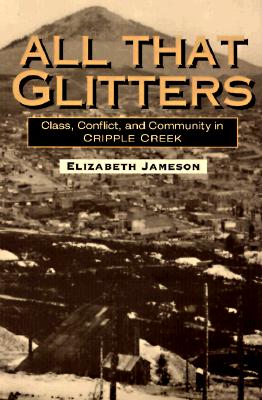 All That Glitters: Class, Conflict, and Community in Cripple Creek

At the turn of the century, Colorado's Cripple Creek District captured
the national imagination with the extraordinary wealth of its gold mines
and the unquestionable strength of the militant Western Federation of
Miners.
In All That Glitters, Elizabeth Jameson tells the better-than-fiction
story of Cripple Creek, the scene in 1894 of one of radical labor's most
stunning victories and in 1903-4 of one of its most crushing defeats.
Jameson's sources include working-class oral histories, the Victor and
Cripple Creek Daily Press, published by thirty-four of the local
labor unions, and the 1900 manuscript census. She connects unions with
lodges and fraternal associations, ethnic identity, families, households,
and partisan politics. Through these ties, she probes the differences
in age, skill, gender, marital status, and ethnicity that strained working-class
unity and contributed to the fall of labor in Cripple Creek.
Jameson's book will be required reading for western, ethnic, and working-class
historians seeking an alternative interpretation of western mining struggles
that emphasizes class, gender, and multiple sources of social identity.
A volume in the series The Working Class in American History, edited
by David Brody, Alice Kessler-Harris, David Montgomery, and Sean Wilentz

Title: All That Glitters: Class, Conflict, and Community in Cripple Creek

All That Glitters: Class, Conflict, and Community in Cripple Creek