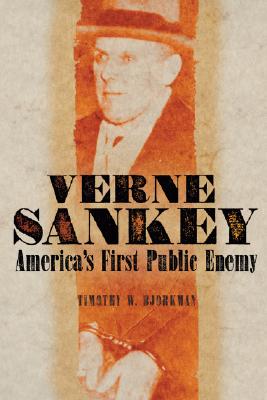 In late January of 1934, as authorities delivered John Dillinger to an Indiana jail, the United States Justice Department announced, for the first time, that the Federal Bureau of Investigation had just captured America's Public Enemy No. 1. It was not Dillinger the Justice Department was referring to, but an affable railroader turned outlaw, Verne Sankey. Now Timothy W. Bjorkman has written the first full-length biography of this overlooked criminal, relating how a South Dakota family man became a bootlegger, a bank robber, and eventually, a kidnapper whose deeds heralded a nationwide crime spree.

In the early days of Prohibition, Sankey, then a locomotive engineer, was drawn to the easy money he could make bootlegging. When crime syndicates monopolized the trade and Prohibition's end was in sight, he turned to the occasional bank robbery and eventually to a ransom scheme. In tracing the life of Sankey--and his demure wife, Fern--Bjorkman depicts a good-natured man, friendly neighbor, and gentleman rumrunner catering to the banker and broker trade. He also explores Sankey's motivations, his identification as America's first Public Enemy, and his ultimate descent into oblivion.

Verne Sankey: America's First Public Enemy is a riveting narrative set amid the Great Depression. Bjorkman's research painstakingly reveals the life of Verne Sankey and his times, delving into the intriguing story of the family of his kidnapping victim, Charles Boettcher II, and the stark contrast between wealth and poverty during some of America's most harrowing days.